Thank you to Pierre Joly for nominating The Plug In And Go Green Eco Charger for the Hot Air Oscar for Best Use of the "if-everyone" Multiplying Machine. If you've read Sustainable Energy - without the hot air or my page on phone-chargers left on standby, you'll know how thrilled I am to learn that
"The Eco Charger reduces the amount of energy needed to power a mobile phone more than any other on the market."
Fantastic news. If everyone got one of these, the ad says, the UK "could make a collective saving as a country of £85 million" (assuming, incidentally, an electricity price of 28.5p per kWh... Shurely a bit high?!).
Unfortunately the CarPhone Warehouse didn't have the space in their advertisement to apply the "if-everyone" multiplier to the price tag, but the Hot Air Oscars column is happy to help out: If everyone in the UK bought one of these "Eco Chargers" (at £22.99), it would cost us, as a country, £1.3 billion.
Posted by David MacKay FRS at 11:35 PM 2 comments:

Nick Cook has nominated the EDF Energy ideal home show, Alex Hort, and the University of Plymouth for a Hot air Oscar for "An ingenious idea that recovers useful energy from a drain pipe". "Rain water descending a down pipe is captured and stored behind an internal 'dam'... Each rush of water turns a small, plastic turbine... providing electricity which is stored in rechargeable batteries."
The raw power of rainwater on a roof of area 40 square metres, rainfall 584 mm per year, with a drainpipe of length 6 metres, is 0.001 kWh per day. This is less than one ten-thousandth of the average British person's electricity consumption. The economic value of the power captured by this contraption is roughly 5 pence per year. The energy cost of making the system and inserting it into a drainpipe must be many times greater than the energy it would ever give back.
Posted by David MacKay FRS at 5:17 AM 3 comments: PS - To see the whole certificate in one image, follow this link
Posted by David MacKay FRS at 2:29 PM 6 comments: 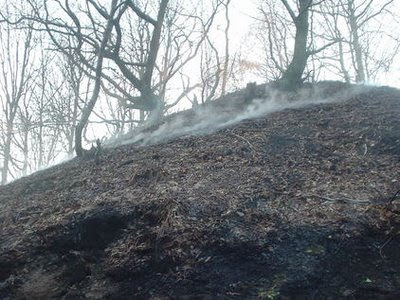 People often emphasize the role of uncontrolled accidental burning of fossil fuels in backward parts of the world.
I grew up in a part of the developing world called the Potteries, near the middle of England. The Potteries were rich in clay and coal, and one hill near Keele village was stuffed with little coal mines when I was a child. There were rich thick seams very close to the surface. These photos and google satellite maps show what's left there now: a great pile of rubble that is perpetually on fire. It looks rather like a Hollywood movie's improbable view of medieval England, in which every slope somehow has smoke scudding across it.
Posted by David MacKay FRS at 4:51 PM 1 comment: