There is a new release of my 2010 "Sustainable Energy - without the hot air" lecture at Caltech which includes close-captioning. Thank you, CMU, for providing the cc!


2: Improving the HTML for viewing on small devices

I have made a New Contents Page for Sustainable Energy - without the hot air - http://www.withouthotair.com/sewthacontentsTHIN.shtml which is intended for viewing on thin, small displays. This contents page enables quick navigation to any page in the book. I recommend bookmarking it as the best quick way into the HTML book, especially on a smart-phone.
More enhancements to the HTML version of the book may be on the way soon.
For twitter users, I've added a "tweet" button to the top of every HTML page.

Lots of people have asked me whether recent hype and hoopla about solar panels and batteries overthrows what I wrote in my book in 2008. I am preparing a detailed update. Watch this space! The theme of my update will be the existence of a phenomenon called winter, which many of the solar-hyponauts seem to ignore. Here is a teaser trailer showing the winter and summer 3-month-average insolation in 50 US states. Posted by David MacKay FRS at 2:44 AM 4 comments: Links to this post

I heard that recently-built UK offshore wind farms have higher load factors than old wind farms. I thought it would be interesting to plot the raw data, which is available from the helpful REF website. (The load factor is the ratio of the average output of the wind farm to the maximum possible output, and it is usually expressed as a percentage.) The graph below shows the rolling load factor of the 27 offshore wind farms in the UK, versus their accreditation dates. The size of each point is proportional to the capacity of the wind farm. 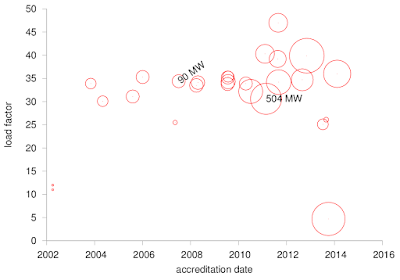 One of the newest wind farms has a very low rolling load factor - this is Gwynt y Mor, the bottom right point on the graph; Gwynt y Mor is the second biggest offshore wind farm in the world. Presumably this poor load factor is a temporary glitch associated with the commissioning of the wind farm. If we ignore that point as an outlier, and simply compare the average rolling load factors for accreditation dates before and after June 30th 2010, it looks as if the average load factor may have increased from about 33.9% (± 2%) to about 37.4% (± 1%).
Of course, a proper analysis should account for ageing effects and variations in the weather, both of which have been carefully studied by Staffell and Green. They found that "Wind turbines ... lose 1.6 ± 0.2% of their output per year" (which implies, for a load factor of 35%, a reduction in load factor of 0.56% per year - a trend that I have shown by the green straight line in the next graph). 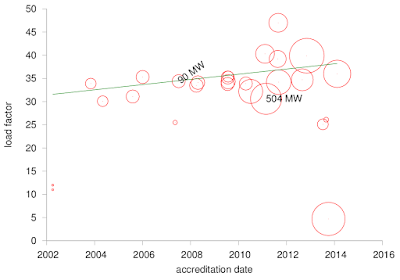 So, has there been a technological improvement in offshore wind turbines that has boosted load factors? Having been involved in innovation support while I worked at DECC, my prior expectation was that the answer to this question could easily be "yes". But actually it looks like it is possible to account for the apparent trend in the data by a simple "ageing" hypothesis: perhaps the newer wind farms are better just because they have aged less?
Posted by David MacKay FRS at 8:04 AM 7 comments: Links to this post