In December 2013, Christopher Booker in the Telegraph discusses a study by Gordon Hughes, published by the Renewable Energy Foundation in December 2012, which is said to show, due to wear and tear on their mechanisms and blades, the amount of electricity generated by wind turbines "very dramatically falls over the years". Booker asserts that "Hughes showed his research to David MacKay, the chief scientific adviser to the Department of Energy and Climate Change, who could not dispute his findings." This is not true.
In fact, I doubted Hughes's assertions from the moment I first read his study, since they were so grossly at variance with the data. 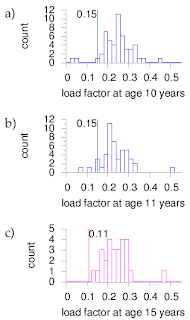 The animation above illustrates this non-identifiability. The truth, for a cartoon world, is shown on the left. On the bottom-left, the data from three farms (born in 87, 91, and 93) are shown in yellow, magenta, and grey; they are the sum of a age-dependent performance function f(a) [top left] and a wind variable v_t [middle left]. (The true site 'fixed effects 'variables u1, u2, u3 are all identical, for simplicity.) On the right, these identical data can be produced by adding the orange curve f(a) to the site-dependent 'fixed effects' variables u1, u2, u3 (shown in green), thus obtaining the orange curves shown bottom right, then adding the wind variable [middle right] shown in blue (v_t).
Posted by David MacKay FRS at 2:12 AM 4 comments: