I DO advocate switching off electrical gadgets on standby 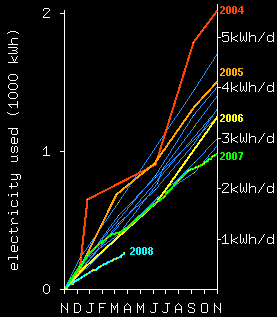 Well, well, it's been an interesting few days... Since The Register posted an article about my draft book, I've received a flood of emails, and been shocked to observe the cacophony of people on blogs and bulletin boards all debating 'what the Professor said', plopping me in one camp or another of their running battles.

I'd like to make one suggestion to everyone: if you want to discuss what I said in the book, please read the book!.

Some readers seem to think that whatever the journalist wrote, I said. For example his introduction said that most people 'have no need to worry about the energy they use to power their electronics; it’s insignificant compared to the other things'. That was the journalist, not me! This attitude to standby power has provoked the mob to get out their flame-throwers, saying 'MacKay should know that 8% of all domestic electricity goes to power junk on standby!' Sigh!

The last thing we should talk about

Wallace Broecker has been promoting the idea that `artificial trees are the way to solve global warming'. Pushed for details, he says that `brilliant physicist Klaus Lackner has invented a method to capture CO2 from thin air, and it doesn't require very much energy'. Broecker imagines that the world will carry on burning fossil fuels at much the same rate as it does now, and 60 million CO2-scrubbers (each the size of an up-ended shipping container) will vacuum up the CO2.

I think it's a very good idea to discuss capturing CO2 from thin air, but I feel there is a problem with the way this carbon scrubbing technology is being discussed. The problem is energy: how much energy does Lackner's CO2-capture method require. `Not very much'? Come on, we need numbers, not adjectives.

Here are some of the numbers required for a coherent conversation about carbon capture. Grabbing CO2 from thin air and concentrating it into liquid CO2 requires energy. The laws of physics say that the energy required must be at least 0.24 kWh per kg of CO2. What does Lackner's process require? In June 2007 Lackner told me that his lab was achieving 1.3 kWh per kg. Let's imagine that further improvements could get the energy cost down to 0.7 kWh per kg of CO2.

So as a ballpark figure, the Broecker/Lackner plan requires an amount of energy equal to current electricity production.

P.S. What about trees?. Trees are carbon capturing systems; they suck CO2 out of thin air, and they don't violate any laws of physics. They capture carbon using energy obtained from sunlight. The fossil fuels that we burn were originally created by this process. So, the suggestion is, how about trying to do the opposite of fossil fuel burning? How about creating wood and burying it in a hole in the ground, while, next door, humanity continues digging up fossil wood and setting fire to it?
From the minutes of the Select Committee on Science and Technology, the best plants in Europe capture carbon at a rate of roughly 10 tonnes of dry wood per hectare per year. Or in equivalent CO2 terms, that's about 15 tonnes of CO2 captured per hectare per year.
So the area of forest per person required to fix a European output of 11 tonnes of CO2 per year is 7500 square metres per person. (And then you'd have to find somewhere to permanently store 7.5 tons of wood per year!) Taking Britain as an example European country, this required area, 7500 square metres per person, is twice the area of Britain.
Posted by David MacKay FRS at 2:01 AM 12 comments: