Designers with a conscience

Graphic designers for good - looks like a useful community of people to tap into! They don't just want to promote useless consumerist tat.
Posted by David MacKay FRS at 2:09 AM No comments: 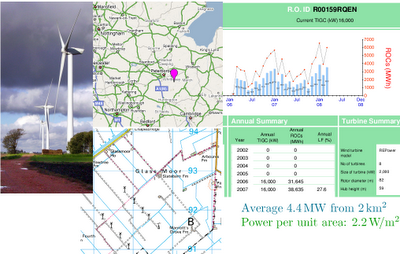 This is my third post giving factual data about the power per unit land area of wind farms in Britain. My first post described a farm near the coast made of small machines (27m diameter); the power per unit area was 1.4 W/m2. The second post cherry-picked the best windfarm in Britain (located in Shetland); the power per unit area was 6.5 W/m2. The turbines there have diameter about 50m. Now returning from mid-ocean, let's ask "what do really big land-based turbines deliver?" I picked the Glass Moor windfarm, which has eight 2 MW machines, each with a diameter 82m. (It's the biggest windfarm close to Cambridge; no special cherry-picking, here.) Looking at the OS map, I judged the area occupied by the windfarm to be 2 km2. Based on one year's data, the average output of this windfarm (per unit land area) is 2.2 W/m2.
These data support the view that 2 W/m2 is a good ballpark figure for the power per unit area of a modern windfarm in England.
Posted by David MacKay FRS at 4:49 PM No comments:

I enjoyed reading John Mashey on how science works, and how to critically read scientific claims such as those made by climate-change inactivists. From there, I found my way to his equally interesting analysis of Bjorn Lomborg's motivations. I actually rather like Bjorn Lomborg and don't think he's the antichrist that many make him out to be; but it is interesting to read John Mashey's analysis of the political effect of Bjorn Lomborg's arguments. In a nutshell, Lomborg's recent writings have said "yes, global warming (X) is a priority, but not as high a priority as 'A' and 'B'", where John Mashey reckons A (Eg, give lots of money to the developing world to fix things there) has been chosen not because Lomborg really wants to devote effort to A, but rather because he knows these sort of aid donations won't happen, so putting them top of a list of priorities is a good way of persuading people not to do lower things in the list (X). The space in the list between A and X is padded out with other items ("B") (eg, open up free trade more) that the neo-cons would be happy to see happen. Interesting analysis.
Myself, I had a different take on Lomborg, which is that he genuinely does care, and wants us to choose numerate policies that work; and that he comes to different conclusions from some of us simply because he tacitly chose a different objective from what we might have chosen. Specifically, the objective in his recent books seems to be something like "human economic welfare between now and the year 2100". I'd love to sit down with Lomborg and discuss what he thinks the optimal investments would be if the objective were changed to "planet still functioning well at supporting human life in the years 2200, 2500, and 3000".
I've tried to converse with Lomborg but sadly I think he's too busy being famous now.
Posted by David MacKay FRS at 5:16 AM 5 comments:

I'm happy to announce the launch of the first annual "Hot Air Oscars".
These awards go to the person or organization who (in the judgment of the panel) best exemplify the modern-day survival skills of greenwash and twaddle-emission. There will be awards for "most misleading advertising", for "best use of magic playing fields", for "best doublespeak", for "most creative use of the word 'zero'", for "best bogus comparison", for "best speaking with many faces", for "best supporting liar", for "best inflated difference", and for "best conparison".
Nominations may be sent to David MacKay. Shortlisted achievements will be featured on this blog over the next month or two. The winners of the Hot Air Oscars will be announced in mid 2009.

Opening nominations...
The first nomination in the "best green spin" category is the fine attempt by David McKay [no relation], director of dining services at Eastern Washington University (EWU), and Paul Kyle, associate director of dining services, to put a positive spin on their decision to use disposable Styrofoam plates and bowls in the cafeteria. "Our goal is to lessen the amount of BODs [organic pollutants in water] by washing fewer dishes," said Kyle; "The use of Styrofoam plates and bowls is an excellent energy source for the waste-to-energy plant," said McKay.
or to put it another way, Styrofoam plates are great because you can just throw them away and burn them. They claim that this initiative somehow ties in with a local initiative called Recyclemania.

I am sure the environment is thanking them for their efforts, but not everyone is so supportive. Laci Hubbard, president of the Eastern Environmental Club, said that while the group is pleased that Dining Services has been supportive of ... Recyclemania, they are "concerned about the move to use additional Styrofoam products and the logic of their subsequent explanation for why Styrofoam is a better choice for the environment."

Please keep the nominations rolling in. The judges will be happy to consider new categories for the Hot Air Oscars.
Posted by David MacKay FRS at 1:51 PM 5 comments:

Executive summary:
The windfarm with the highest load factor in the British Isles has a power per unit area of 6.5 W per square metre.

Background:
Commentors on my previous article on
the power per unit area of windfarms queried whether any cherry-picking might have happened
in the selection of Blood Hill windfarm; it was also suggested that we should work out the numbers for Burradale, the famous windfarm in Shetland with the highest load factor in Britain. The answer to the first query is "no, not at all" - Blood Hill was selected at random, and as I said, I would encourage anyone who can be bothered to look up the data for other windfarms to do so and add the results to the "withouthotair" wiki.
And now, to satisfy the request for cherry-picked facts about wind in the UK, I am happy to present...

The data: Burradale has five wind turbines: three in "phase 1" and two in "phase 2". Their capacities are 660 kW and 850 kW respectively, and their average outputs over the last few years have been 357 kW and 446 kW respectively. (That corresponds to load factors of 52% and 54%.) I judged the "area occupied" by the five turbines to be 0.3 square kilometres. The average power per unit area of this windfarm is 6.5 W per square metre.

This number can be compared with my assumed figure of 2 W per square metre for typical onshore windfarms in the UK.

So, a cracking good place for wind, Shetland! What does it need? Obviously what this place really needs is a campaign group opposed to expanding wind farms in Shetland. And The Good Lord hath provided "Sustainable Shetland".
Posted by David MacKay FRS at 12:15 PM 9 comments: