The FCX Clarity from Honda

On this week's Top Gear, James May called the FCX Clarity "the most important car for 100 years".
[Photo courtesy of automobiles.honda.com.] It runs on hydrogen, which "will never run out", because it is "the most abundant element in the universe". And the only emissions are water.
What twaddle!
The programme took the time to point out that the electricity to power a Tesla electric car in Britain is produced at a fossil fuel power station. Why didn't they also discuss where the hydrogen comes from?
Top Gear loves to quantify accelerations, lap times, car prices, top speeds - why couldn't they quantify the energy requirements to run "the car of the future", the FCX Clarity? And compare it with the Tesla?
Here's the answers, according to chapter 20 of Sustainable Energy - without the hot air.

The energy consumption of the FCX Clarity is 69 kWh per 100 km. (Very similar to the consumption of an ordinary fossil fuel car.) That's assuming the hydrogen is produced in the standard way, using lots of methane and a bit of electricity, and counting one unit of chemical energy as having the same energy content as one unit of electricity. Meanwhile, the energy consumption of the Tesla (according to its manufacturers) is 15 kWh per 100 km. (Of electrical energy.) Even if we penalize electricity, saying "every 1 kWh of electricity costs 2.5 kWh of fossil fuels", the Tesla is still much better than the fuel-cell car, and better than the average fossil fuel car. (And in the future, we won't be getting electricity from fossil fuels, hopefully!)
So the hydrogen car is NOT a "solution" to our problem, if our fundamental problem is an energy problem.
Posted by David MacKay FRS at 6:33 AM 9 comments:

Why on-site renewables don't add up 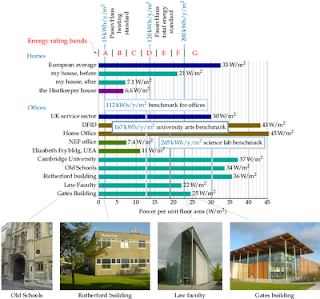 Straight up, I want to say I love renewables, and I believe that we should have a massive increase in renewables as part of making a sustainable energy plan that adds up (as explained in my book Sustainable Energy - without the hot air, now available on paper).
This is an article about on-site renewables. Imagine a developer is making a new urban development. Offices or homes, perhaps. A three-floor building. Under some planning regulations, new buildings must get some fraction of their energy consumption from on-site renewables. Now, these regulations have some undeniable benefits: if it is expensive to install on-site renewables, the developer may modify the building so as to reduce its energy consumption, thus making it less costly to reach the required renewable fraction. Having local renewable energy production may also increase awareness about energy consumption among the building's users. And some local renewables are no-brainers - making hot water using solar panels, for example, makes complete sense, providing roughly half of the hot water consumption of an average home.
But here is the problem:
On the left, 200 kWh per year per square metre is the typical total energy consumption of many homes and offices, expressed as energy per year per square metre of floor area. In terms of energy rating bands, 200 kWh/y/m2 is the boundary between bands F and G. Many government buildings use twice as much as this. (The Home Office uses 400 kWh/y/m2, for example.) The Passivhaus standard, at 120 kWh/y/m2, is not much better than this 200 kWh/y/m2 benchmark.
On the right, I've converted this quantity into watts per square metre, which are the unit in which I prefer to express renewable power production. Sadly, most renewables have powers per unit land area that are substantially less than 23 W per square metre. Wind farms generate 2 W/m2. Energy crops generate 0.5 W/m2. Solar photovoltaic panels generate 20 W/m2. And remember, we're imagining a three-floor building. So the power required per unit land area occupied by the building is not 23, but 3x23 = 69 W/m2.
On-site renewables are an interesting gesture, but if we are serious about renewables making a big contribution, they have to be big - they must occupy a land area much bigger than the land occupied by the buildings we are powering. If you want to completely power a three-floor 200 kWh/y/m2 building from energy crops and wood, for example, then the land area required for the energy crops and wood must be roughly 140 times as big as the land footprint of the building.
The response of an angry green campaigner to what I have just written can be predicted: "But we could make the buildings far more efficient!" Could we? I'd love us to build more-efficient buildings, but show me data. Not wishful thinking, but NUMBERS. The Elizabeth Fry building at UEA is often held up as an example of a state-of-the-art eco-friendly building. And here are the numbers for that building (from page 299 of my book). It consumes 96 kWh/y/m2, which is 11 W/m2, which is only about 50% better than the Energy-Rating-Band-F/G benchmark from which I started.
The bottom line: if you want to completely power a typical building, or even an amazing eco-building, from renewables, most of those renewables have to be offsite. There isn't room on-site! And it's probably a better use of resources to accept this fact up front, rather than force developers to squeeze uneconomic figleafs (such as micro-turbines) into their developments. We should modify the planning regulations for new buildings so that developers are still required to build renewables, but are encouraged to build new renewable capacity off-site.
Posted by David MacKay FRS at 3:09 AM 31 comments: