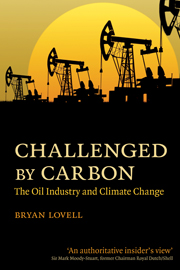 I'm reading Challenged by Carbon: The Oil Industry and Climate Change by Bryan Lovell.
Bryan Lovell is a geologist who has worked in academia and the oil industry for decades. This is an unusual book, intertwining two stories, one of them 55 million years old, and one less than 55 years old. I've not heard either story told before, and both are fascinating.
For the older, slower story, Dr Lovell delves into the details of the geological history of Iceland, the North Atlantic, and the North Sea. He describes how local heavings of the planet's stomach have caused a sub-ocean ridge between Scotland and Iceland to slightly rise and fall, having knock-on effects on ocean circulation and global climate; how slight variations in the average intensity of sunlight in the Northern hemisphere cause changes in climate on a timescale of 20,000 years which can be detected in sedimnetary rocks; and, crucially, how a large natural rapid release of carbon into the atmosphere, 55 million years ago, led to an enormous global warming event, raising the temperature of the water at the bottom of the ocean by more than 4 degrees C within roughly 10,000 years.
The younger, rapidly-moving story is the `insider's view' of how the oil industry, in the last 15 years, changed its mind about human-caused climate change. Starting from positions of climate inactivism (by which I mean "yeah, it may be true, but there's lots of uncertainty and there's no point doing anything, and we oppose greenhouse-gas-reduction treaties") or outright denial, the big oil companies, driven by the science, changed their tunes. First, in 1997, Shell and BP, then, in 2004, ExxonMobil came round to the view "that there is a big problem and that urgent action is required". Lovell knew all the key players well, he was there at the dinner-table discussions where this "Atlantic divide in Big Oil" heaved to and fro, and he hints at the bruising personal conflicts that took place as the oil experts argued about the science. Lovell identifies a particular BP-ExxonMobil debate held by the Geological Society's Petroleum Group in London in 2003 as a turning point in the argument, and describes at length this conversation, whose backdrop was the start of the 2003 Iraq war.
The two stories are connected in multiple quirky ways: the ancient global warming event was probably associated with an uplifting of Scotland that led to the deposition of the North Sea oil fields, from which the oil-folk derived much of their recent wealth; and, more significantly, Lovell describes the 55-million-year-old global warming event as one of the pieces of evidence that helped swing the climate-change argument: oil-men believe what they see in the rocks, and those rocks give uncomfortable evidence for what happens when a large amount of carbon is suddenly released into the atmosphere.
Both stories have the feeling of incompletely-solved detective mysteries. Where did the carbon come from in the ancient global warming event? Was it methane hydrates? Volcanoes? Or some other form of carbon deposit? Was it Iceland that precipitated the global transformation? As for the present-day conversion story, Lovell leaves the reader wondering whether the detective story is yet over - yes, some oil companies greened up their public facades in 2003, but have they reverted to business as usual behind the scenes? And what about the rest of the oil industry?
In the second half of the book, Lovell indicates how he hopes the drama will unfold: "government intervention is essential" in relation to the transition to the low-carbon economy; "concerted action" is required from all oil companies; oil companies should turn their remarkable technical skills to a new waste management business: capturing and storing carbon, especially carbon from coal power stations.
Now, I love physical numbers, so let's recap some of the key numbers for carbon capture. A standard unit of carbon capture and storage is "the Sleipner": thanks to Norway's implementation of a carbon-emission tax of $55 per tonne of CO2 (which can be compared to today's EU market price of 14.10 euros per tonne), StatoilHydro is storing 1 Mt CO2 per year in the Utsira saline aquifer under the North Sea. A 1-GW coal power station, running all the time, produces roughly 7 Mt CO2 per year. So every 1-GW power station would require roughly 7 Sleipners, and the cost to the consumer for electricity from that source might be in the ballpark of an extra 4p per kWh of electricity (similar to the present subsidy for wind power in the UK). The scale of the waste to be stored is worth mentioning. The volume of 7 Mt CO2 (the approximate annual waste from 1 GW coal power station), after it's been compressed to the same density as water, is three times the volume of the great pyramid at Giza. If Britain were to build, say, 33 GW of `clean coal', the volume of compressed waste that would have to be pumped through pipelines and into rocks under the North Sea would be 100 great pyramids per year; or, to put it in personal terms, 13 litres per day per person in the UK, every litre of this waste CO2 having the same weight as a litre of water.
This book is fascinating reading.
David MacKay, 18 October 2009
Posted by David MacKay FRS at 2:26 AM

In your book you have a section on weird measures that we Engineers and Scientists hate, such as "households of electricity". Now you introduce Giza Pyramids of compressed carbon dioxide!

At net lifetime emissions of about 165g CO2e/kWh, I make 33GW of CCS coal equal to about 48MtCO2e per year, which really would get in the way of decarbonising the grid, wouldn't it? That is, if we take the 90% reductions target seriously, we'd have about 20MtCO2e/y left spare to meet the other 70-85% of our energy requirements, plus emissions from cement and agriculture. EPIC FAIL.


Not to mention all of the extra oil that would get burnt because the oil industry had persuaded government to use the CO2 for Enhanced Oil Recovery [EOR]. Funny how CCS proponents claim they get the carbon savings, but EOR claim the same carbon savings against their own emissions: but in the end, CCS means more carbon gets emitted into the atmosphere.

So does CCS stand for Carbon Con for Suckers?

Yes, if CCS coal achieves emissions of 165g per kWh then that's definitely not going to be good enough for the climate targets.

I'm just curious to know if the compressed CO2 from coal power would fit nicely in the coal mines from whence the coal came.

Andrew Kay --- Alas, no. Coal is about 60% carbon but CO2 is only about 27% carbon. Furthermore, above a rather modest amount of CO2 (that amount for which the remaining coal has a sort of chemical affinity), the CO2 would be subject to leakage.

A nice little article you may like to look at some time. It attempts to exposed some of the myths in energy efficient buidlings.

I thought it might be useful to you in some way.

My answer to the ‘CCS Con’ charge of Andrew Smith-Gibbs is that we shall need carbon capture and storage from large coal-fired power stations to help us to manage the global transition to a low-carbon economy. The power sector is responsible for about 40% of global emissions and coal represents about 70% of emissions from the power sector. Considerations of price and energy security indicate that this dominance of coal is likely to continue for at least 20 years, even given the rapid progress on nuclear power and solar power urged by you, David.

An industry similar in scale to the present-day oil industry could pump underground each day compressed carbon dioxide in volumes comparable to the c.80 million barrels daily production of oil (yes, we old explorers still use quaint measures for oil). That daily production of oil is accompanied by over 200 million barrels of water. Injecting carbon dioxide, in volumes comparable to that total flow of c.300 million barrels a day from present-day fields, could bury some 450 gigatonnes of carbon dioxide by mid-century. Reversal of flow of fossil carbon on that scale is clearly not going to happen in existing oil and gas fields, but those numbers give some indication of the scale of the contribution that could be made by storage in subsurface reservoirs.

There are carbon thoughts gloomier that have to be thought about.The emissions that are affecting our health every day.

Mackay mentions the pulverization and dispersal of alkaline earth orthosilicates -- Mg2SiO4, Ca2SiO4 -- in SEWTHA, section heading, as I recall, "The last thing we should think about", but if we are now talking about compressed carbon dioxide, it seems we aren't thinking about catalysing the stuff's spontaneous condensation at all.

The products of the minerals' condensation of CO2 are silica and alkaline earth carbonate, a mixture that could make actual pyramids.

(How fire can be domesticated)