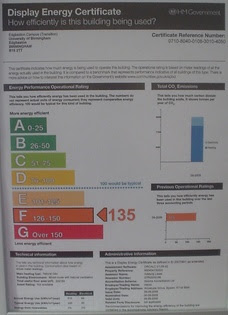 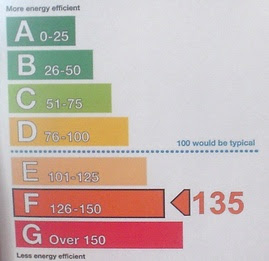 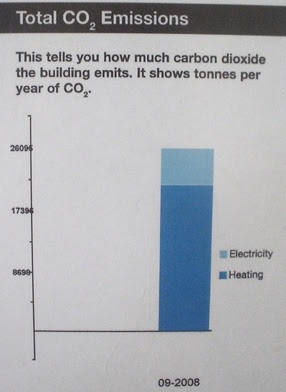 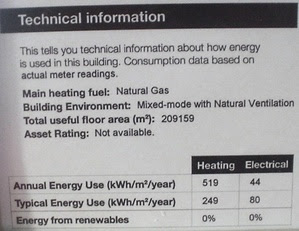 PS - To see the whole certificate in one image, follow this link
Posted by David MacKay FRS at 2:29 PM

Perhaps it would be helpful if you could sketch a, in your opinion, meaningful certificate.

I think the annualisation comparison is sensible; the shortest period without seasonal effect.

The units of calculation are presumably?? something like energy consumption per sq m of space-- or per worker. This should be plotted.

The compariosn to other buildings cannot sensibly be represented but should be registered and an analysis available online.

From a political perspective, this is an excellent scheme. The colourful notices proclaim that Something Is Being Done; the training of energy assessors can be promoted as 'job creation'; the number of gauleiters in government employ is increased and wannabe gauleiters are encouraged; the costs are largely borne by the private sector; blame and responsibility is generally placed on someone else; and the over-simplification helps to keep public opinion dumbed down.

Hmm, yes, I'd like to know what allowances are made for 'that sort of building'.

At home with near continuous occupation 24x7 we have electricity ~25kWh/m^2/y and gas/heat ~100kWh/m^2/y (though I hope to halve the gas/heat demand and we are net electricity exporters, so really -5kWh/m^2/y or something on that front!).

So your example building is astonishingly bad compared to my little ex-council house!

Anyway, maybe this certificate version can serve as a straw man and get fixed in a few years' time?

interesting comments. I think you may find that as they are done each year (legislation requires annual renewal of certificates) that teach area will become more relevant. So the scale for example will be off little consequence, but rather a visual improvement on the previous year.
That said, i agree ti does little to change behavoiur of those using the building unless supported by measures to change the usage and habits of the users/controls.

This is important because public authorities could be breaking their backs to promote small G-rated buildings to Fs for the sake of appearances, when more absolute energy could be saved by taking one large building from the bottom to the top of the E band (to take one hypothetical example). In other words, DECs probably cause misallocation of economic resources.