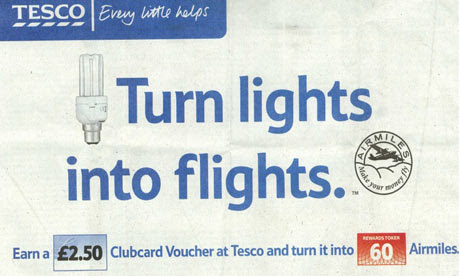 Wow, Tesco has to be a strong contender for the Hot Air Oscar for best consumer-engagement
Posted by David MacKay FRS at 10:28 AM

sorry for the off-topic comment / link. but I wondered if you'd seen this (and if not, if you'd be interested)

Mr Wheeler works for a think tank that's pretty inflential in Washington, and concentrates a lot on what the World Bank does with its sustainable tech fund. Among his other stuff, he has a paper "Desert Power, The Economics of Solar Energy for Europe" - see "Publications"" in the above link, that I thought you might be interested in.

 It’s quite funny really. I have a much more boring nomination.

“Sorry to hear you can’t find enough fuel to keep warm, grandson. Those new car manufacturers really were strapped for cash in 2009, so we had to give them the scrapping incentive, just to keep them going…”

The weekend papers suggest that the Treasury is under heavy pressure, *as a green measure!*, to help our struggling car manufacturers to sell more new cars, with an offer of large cash incentives for owners of older cars to scrap them and buy new ones.

I wonder if I could persuade you to offer to these same newspapers your own "numbers, not adjectives" analysis of this proposal.

I tried using the more modest figure you suggest of 30 500 kWh for the embodied energy of a car, and calculated a saving of 2kWh per person per day on keeping a car for 12 years, rather than scrapping it at 9 years, on embodied energy alone.

Realistically, in my experience, most people driving an older car would tend to drive somewhat slower than a new one. I know I do.

Let’s suppose the new car is driven for say 35 miles a day at 70 mph, or 40 kWh a day, and the older car a modest 10% slower, or 63mph. Ignoring for the moment the fact that in practice, the older car is likely to actually be driven fewer miles, let's look at the impact of the 10% slower speed. On my calculations this seems to reduce the 40kWh per day to less than 30 kWh a day, over 25% less fuel consumption for the 10% slower speed.

Finally add in the fact that realistically, it's only human nature that the new driver will want to show off his new car, and be more tempted to use it as well as go faster. Factor in a 10% lower usage of the older model this won’t apply to, and we get to 27kWhh a day against 40kWh a day for fuel on the newer model.

Once we add something in for the embodied cost effect, on my calcluations, the new car has to be overall 30% more efficient in green terms before we even break even with this.

How much of a net benefit are we actually going to gain for each 9 year old car traded in for a new model, at a cost of a, say, £1,000 incentive?

PS On the other rationale offered of keeping workers in work, maybe I'm missing something. Is there any reason why the labour on car service and repair, usually carried out fairly locally, is less deserving of support than the labour on new car manufacture, often carried out thousands of miles away in different countries? (A purist might wish to add in the cost of transporting them to the user in my calculations, but I'll leave it at that).

How's this for funny? I have given up shopping at Tesco and will now only use the Coop supermarket. I use the Coop for most things, finances, mortgage, etc.

I recently checked out the Co-op's Sustainable Leaders Unit Trust. I was quite surprised, and not a bit fed up, to noticed that the 'top ten holdings' showed 4% of the fund invested in guess who? Tesco. :-( http://www.co-operativeinvestments.co.uk/cfscombi/pdf/invest/CIS_Sustainable_Leaders_Trust_60009198.pdf

activist group the Suffrajets got on it: