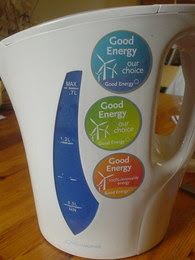 As I mentioned in another post, I switched from electricity-generator, Powergen, to "Good Energy", out of irritation at Powergen's perpetual greenwash.
Now I've learned from The Guardian that Good Energy may have been duping me with greenwash too!
One of the minor advantages of Good Energy over the competition was that they claimed to actually retire some ROCs (renewable obligation certificates), which has a genuine "additional" effect, as it increases (slightly) the financial incentive to people putting up renewable generation facilities.
However, according to the Guardian, Good Energy have not been retiring as many ROCs as their blurb led customers like me to believe. Oh dear.
Their blurb said things like:
"Good Energy goes above and beyond the percentage required by the government (8.9 per cent in 2008), by retiring an extra five per cent of ROCs (ie, 13.9 per cent in 2008)."
but in fact, they've been retiring only about two per cent.
It's an awkward consequence of the slightly goofy Renewables Obligation system.
To get your subsidy for generating wind power, you have to cash in the certificates. (The certificates are then bought by brown companies like Powergen that are not generating enough renewables, to get them off the hook.) If you retire the certificates instead then you don't get any subsidy. So it's really hard to do anything "additional". People trying to do Good get no subsidy.
If Britain had a feed-in tariff instead, like Germany, I think this Catch-22 would be removed. Everyone who generated extra renewable electricity would be rewarded for doing so, and no-one else would be let off any hook thanks to their generation.
It's sad that Good Energy and Ecotricity are having this spat with each other. I was at a round table meeting in London, organized by the Ecologist magazine, attended by both the CEOs of both companies, and there, everyone seemed to be on the same side.
I think, going by the news article, that Good Energy have been naughty. And as a customer I feel a bit disappointed. My advice to Good Energy would be "stop trying to make out, through funny accounting, that you have been retiring 5%. Just give up on the retiring idea".
Posted by David MacKay FRS at 11:18 AM