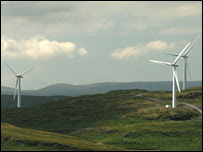 Whitelee wind farm, the biggest wind farm in Europe, is to be completed and 'switched on' this week. And
the news says that the power company is applying to extend the wind farm to increase its capacity from 322 MW to 614 MW.
I mentioned the predicted output of Whitelee in my book (page 33). Since the predictions for Whitelee were one of the sources for my estimated wind-farm-power-per-unit-area of 2 watts per square metre, I thought it was a good idea to look at Whitelee's updated numbers.
When I was writing my book in October 2006, Whitelee's predicted output was said to be "enough to power Glasgow" (Independent, Oct 10, 2006). And now, the latest news says
that, with the proposed increase in capacity from 322 MW to 614 MW, the farm will... generate enough power for [all the homes in] Glasgow!
Curious, Alice might say. We run, and we stay in the same place?
Here are the new numbers.
With two extensions, the total number of turbines would be 221, the capacity would be 614 MW, and the predicted total output is "340,000 households", which in sensible units is 184 MW (assuming that "a household" is defined to be 0.54 kW). This implies a load factor of 30%. The area of the site (according to the Sunday Herald) will increase to 75 km2. So the average power per unit area of the enlarged wind farm is predicted to be 2.45 W/m2.
What is the honest relationship of Whitelee to Glasgow? (I think talking about 'households' is a bit misleading.) The predicted output of Whitelee, shared between the 616,000 people of Glasgow, would deliver 7 kWh per day per person on average. That's roughly 40% of the total electricity consumption of Glasgow, and roughly 6% of the total power consumption of Glasgow (that's 'total power' including transport, heating, etc; not just electricity).

If we assume Whitelee (including its planned extension) is representative of future big wind farms that could be built in Britain, here are some more numbers.
If we want to get off fossil fuels using renewables, we must expect those renewable facilities to be somewhat intrusive.

End notes (in anticipation of the responses people often make)

Posted by David MacKay FRS at 3:02 AM

Thanks for the posts on UK wind power. Very interesting.

I live in sight of Goonhilly wind farm, built 1993. There are 14 turbines and it is a rare day when all 14 are in operation. Do you have any data on how the number of turbines operating affects the load factor?

As a fellow enthusiast for numbers, I might be wrong, but I'm not aware of a government target for 33 GW of onshore wind capacity for 2020. I have seen mention of 33 GW of offshore wind in this timescale - e.g. see this report from the BWEA - but I've seen no equivalent figure for onshore wind.

Also, I'm not convinced the 33 GW figure was an official "target" for offshore wind. I've seen it described in the press variously as a "target", an "aspiration" and a "potential".

I haven't been able to find 33 GW referred to as a "target" in any government literature (thought I'd be happy to be corrected). The figure appears to come from this speech by (then) Energy Secretary John Hutton in December 2007 (emphasis mine):
John Hutton announced proposals to open up [UK] seas to up to 33GW (gigawatts) of offshore wind energy ...

"The draft plan I'm setting out today could allow companies to develop up to 25 gigawatts of offshore wind by 2020, in addition to the 8 gigawatts already planned."
In this speech he clearly refers to "up to 33 GW" of offshore wind development potential, but carefully avoided referring to this as a "target".

This might seem a picky point, but if the government doesn't call something a "target" then it isn't a government target. "Target" reflects a degree of commitment that terms like "could allow" and "up to" do not share. In energy policy, sometimes words can be just as important as numbers.

I've been wondering about the size of the media unit "home", for some time. When you do get an occasional Watt figure, it seems to be being used to mean about 400W. I know that this isn't anything like a per capita figure for electricity consumption, or anything, but it does seem to be the conversion rate which I hear the most on/in the news. I wonder if "the homes in" artificially separates domestic from industrial consumption, as if factories and offices exist for their own edification rather than to make stuff for people in their "homes"!?

Perhaps I should keep a time series of the size of the "media home"?

More on the funny unit of "households of energy": about 430W on BBC News today. Very mysterious.

You're right - the focus on this figure ignores commercial, industrial and public sector demand.

Hi David! I have to admit you do know your stuff. I have to agree with Mike about all turbines not being on at the same time. I live in North Ayrshire and would be interested to know the reason why?

"Why do some of them not turn?"
I can think of three reasons.
1) On a gentle day, each turbine will [I believe] be making its own decision whether to try switching on, based on local wind measurements on the turbine. To try to extract energy on a gentle day, power must be used to get the blades going. I saw a wind farm where you could see turbines in ones and twos giving it a go, and sometimes giving up.
2) On a reasonably windy day, the upwind turbines get the best conditions; downwind turbines may be in the wake of upwind turbines, and thus are more likely to not go on.
3) Faults - software glitches, mechanical problems.
If you really want to know the reason, I would contact the owners of the wind farm. It is huge so I am sure they have a PR office that will spin an interesting story.