The one-percent rule, leading to patriotic thoughts about the Falklands 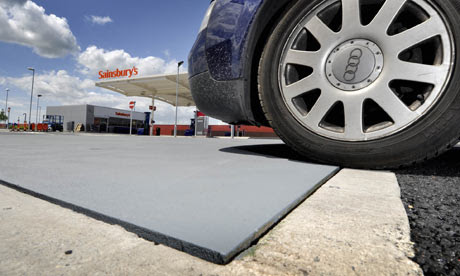 I wrote an article for the Guardian. I called it "The one-percent rule". They called it "Talk of 'kinetic energy plates' is a total waste of energy".

Here's the article I wrote.

I'd like to suggest a one-percent rule for news-articles about energy-saving gadgets or renewable energy systems. The rule says "a gizmo may be discussed only if it could lead to energy savings of at least 1%". I suggest this rule not because minnow-sized savings are
worthless, but because the public conversation about energy surely deserves to be focussed on bigger fish.

The latest piece of green twaddle that's wasting people's attention is
the story (15 June 09) about a new supermarket carpark that has "kinetic road plates" creating "green energy" from the motion of customers' cars.

I'm not saying that these systems don't actually work; perhaps they do save a little bit of energy that would otherwise be wasted in the brakes of the cars arriving in the carpark. But my suggestion is that these systems save so little energy, we shouldn't waste newspaper space on such stories. There must be more important things to discuss (assuming we are serious about getting off fossil fuels).

To prove my point, let's compare the energy that might be saved by the "kinetic road plates" with the total energy used by a typical trip to the supermarket. Let's guess that the kinetic road plates extract one fifth of the kinetic energy of the arriving car. For a car
weighing one ton travelling at 20 miles per hour when it hits the road plates, the extracted energy comes to 0.002 kilowatt-hours (kWh). Now, the energy used by the car, assuming it is driven 3 miles to and 3 miles from the supermarket with a fuel efficiency of 33 miles per
gallon, is about 8 kWh. The savings from parking at the green carpark thus amount to one four-thousandth of the energy used by the trip to the supermarket.

That's much less than one percent. So this "green energy system" is just eco-bling, creating a delusion of happy progress while distracting people from serious change.

What are some ideas that satisfy the one-percent rule? Well, there's lots of examples: a domestic solar hot-water panel will generate roughly 4 kWh per day of hot water, which is roughly 50% of a typical family's hot water consumption, and a bit more than 1% of their total
energy footprint. Example two: wind power - a ten-fold increase in Britain's wind turbines would produce on average 4 kWh per day per person, which is about 4% of our total energy footprint.

When we are planning wind-farms, it makes sense to put them up first in the windiest spots, where the hardware will give the biggest return. So let's talk about wind-farms in the Falklands.

Mean wind speeds in the British overseas territory of the Falkland Islands are 9-11 metres per second, compared with 6-9 metres per second around the British Isles. 1250 3-megawatt turbines in the Falklands would probably produce an average power of 2.5 GW (or 1 kWh per day for every one of the Queen's 60 million subjects). That's roughly 1% of the total energy footprint of the United Kingdom.

Are there any problems with this idea? Well, first, as usual, the wind farms "would spoil the view". There's no free lunch. Serious renewable power requires industrial facilities in the countryside; the point of proposing wind-farms in the Falklands is to reduce the area of countryside "spoiled". The total area of the Falklands is a bit more than half of Wales; the area occupied by 1250 windmills would be about one twelfth of the Falklands. Sheep could, of course, still safely graze among the turbines.

Second, the average power produced by these windmills would probably exceed the electricity demand of the three thousand inhabitants of the Falklands, so we'd need to find other ways of using the power. A traditional way of handling the problem of excess electricity is to
produce aluminium. Iceland and Norway, for example, produce 1% and 4% of the world's aluminium respectively. The Falklands wind-farm sketched above could produce 1.5 million tons of aluminium per year - 5% of world aluminium production. Aluminium is just one example of
a storable product; the electricity could be used to make other energy-intensive materials such as magnesium and cement.

Addendum, in response to the flood of comments on the Grauniad site
Thanks for the feedback! (1) To the Falkland-wind-critics who point out that Aluminium production needs steady power... Yes, I'm aware of that; I thought of saying so in the article, but decided brevity was a virtue. What I would have added is "to smooth out the wind fluctuations, we could create pumped storage systems, or other energy storage systems, just like the four pumped storage systems in the UK (which were built mainly to help match inflexible nuclear supply to fluctuating demand). This would bump up the cost a little.
(2) As for the energy-cost of shipping materials to and from the Falklands, this is one of the striking things I learned when writing Sustainable Energy - without the hot air: those monster ships are amazingly efficient at transporting stuff - far more efficient than trucks. (Read about it on page 91.) I'm not saying that Falkland-wind is definitely a good plan - just that you need to check the numbers before knocking a plan simply for using international shipping.
(3) And finally, to the people who insist in enjoying the delusion that the power harnassed by these silly ramps would be significant if only I compared it with the power consumed by the supermarket instead of with the power consumed by the trip to the supermarket: no. Work out the numbers! Here is a rough stab at the calculation: As you can read on page 93, UK supermarkets consume 0.5 kWh per day per person. If every person visits their favourite supermarket once per 7 days, then their supermarket is consuming 3.5 kWh per personal visit. If the silly ramps manage (as estimated above) to provide 0.002 kWh per arriving car, then the silly ramps are covering less than one thousandth of the energy consumption of the supermarket. Cut the twaddle. These things are eco-bling, whichever way you look at them. All you need, to see this, are simple numbers. [The Falklands idea may turn out to be a bad idea too, but I hope people find it fun to think about.] David MacKay, Cambridge.
Posted by David MacKay FRS at 3:36 PM

hey, i am with you about this eco- bling... the whole idea of these products is to reduce energy use, one bike ride to the supermarket would save less energy by how many times more? i also wonder with these products if they take into account the energy to make the products in the first place. how many cars do they need to park on these things just to make back the energy that it took to manufacture them. i am with you, this stuff is a distraction to much more imortant things to think about and invest in.

David, I'm not sure about the number for solar thermal. UK household energy use for hot water is 11.4 Mtoe / year, or 15 kWh/household/day. So solar thermal can provide around a quarter rather than half of average household consumption (and, nit-picking, presumably less for a typical family)?

@Per: The source for my solar thermal number is on page 39 of SEWTHA http://www.inference.phy.cam.ac.uk/withouthotair/c6/page_39.shtml

- Data provided by Viridian. Their simulated household uses less energy than you said (about 7 kWh per day instead of 15 kWh/d). Perhaps your figure includes hot-water-creation in kitchens (hobs, kettles), and theirs does not. Where did you get your number? Please email me. Thanks!

I wonder how the energy reclaimed through this technology compares with the amount of additional energy a car uses through driving with it's tyres underinflated?

I am wondering David what to do with this 13 megawatt figure I saw on a poster at my local shopping centre.

How do I work back to the footfall through the shopping centre, from the 13 megawatt figure? Is there a logical way to do that. Of course, I know I could visit the website and the shopping centre will have to have stats on visitor footfall in order to attract potential tenants. But I would be interested to figure out somehow, how your 3.5kw per personal visit, which I do visit once every 7 days... compares to the weekly visitor numbers that the shopping centre would claim.

Hi there, i like the 1% rule. would you say that there are no exceptions to the rule? i take it this is a techno only rule and isn't applicable to habit change. although there are big habits like give up the car or plane, which will break through the 1%, i think habit change is a fundamental shift with millions of tiny acts.
i wonder if the difference between technological changes and habit changes can be squared with your "every little doesn't help" ethos??
Shane

Ref Car parking energy recovery. Only some of the energy will be displaced braking energy. Drivers will in some instances have to give more gas to make up for the drag imposed.

Given an engine efficiency of about 20%, assuming a piezzo-electric efficiency of 50%, that means that the supermarket is converting your fuel into their electricity at 10% efficiency. Shouldn't the public be objecting?

Ref Falkland Islands: I've long thought that these Islands could make an excellent showcase for a carbon neutral economy, where green technologies can be trialled using low cost wind energy.

Consider, fuel in the Falklands is expensive thanks to distribution problems. But there's plenty of room for ground source heat pumps, and the Islands are small enough that battery vehicles can work. Meanwhile, fishing vessels might be an application for hydrogen power.

what did you expect? tesco's slogan is "every little helps". you need to get them onto your "every big helps" way of thinking