Most inaccurate numbers in a right-wing newspaper - Hot Air Oscars 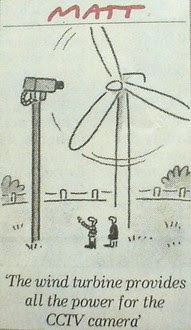 Well well! Ed Miliband's announcement of the government's energy road-map has given rise to a remarkable pair of nominations for the Hot Air Oscar for inaccurate numbers in a right-wing newspaper. What's remarkable is that both pieces of poor journalism, in the right-wing press, make assertions about wind power that spin erroneously in favour of wind power!

The Daily Mail says Research by the University of Southampton has found that a well-placed turbine could make enough energy to power 825,000 homes a year.
Hahahahaha! As usual, the units are wrong. [They should either say "One turbine" could power "X homes" (no "a year"), or "one turbine could make enough energy in a year to power X homes for a year". Why can't people get units right?] But the inaccuracy of "X" is the funniest thing. Realistically, a typical 2MW turbine with a load factor of 27% will produce 0.54MW on average, which, using the standard definition of "a home" (see p 329 for my rant on that topic) means that it can power 1000 "homes", on average. I think a better way to visualize the impact of one such turbine is to say that its output is equal to the total energy footprint (including transport and heating and electricity) of roughly 100 UK people.

The Daily Telegraph has twice propagated another piece of twaddle concerning the area required for wind farms to provide "all Britain's energy consumption". First there is a letter from Anthony Ridge-Newman, Royal Holloway University of London, published Sept 2008, which says "The most startling thing is that scientists estimate all of Britain's energy can be supplied by an offshore wind area as small as 70 square miles", and that "Britain could be producing enough energy from wind to begin exporting to Europe within 10 years." "Startling" - yes indeed! You'd think you'd be sufficiently startled to check your numbers before writing to a national newspaper! And you'd think the newspaper might check the numbers sent in by its startled correspondents before wasting ink on publishing them. But no. The Torygraph has actually printed this "startling" (and false) meme a second time, this time in an "Analysis" piece authored by "Dave Andrews, head of the Claverton Group", published on 16th July 2009. He writes of onshore wind that "it needs an area of only 70 square miles to generate Britain's total power requirements". Crikey. Did the copy-editor do this to make the Claverton Group look like a bunch of fools? Apparently so, yes! - The Claverton site says the article as submitted said "a 70-mile by 70-mile square". Yes, that would be 70 times more accurate! For the record, (see my survey of UK wind farms if you want, where I show that UK wind farms, whether onshore or offshore, generate roughly 2.5 watts per square metre, on average), 4900 square miles of windfarms would generate about 32 GW on average, which is close to Britain's average electricity consumption (it's about 42 GW). If you want to produce "all Britain's energy consumption today" (ie transport and heating too) then you need about nine times the area, since Britain's primary energy consumption is about 300 GW.
The bottom line - the Daily Mail article is off by a factor of 825, and the Telegraph's rendition of Clavertonism is off by a factor of 70 or 630, depending on whether you allow energy to be confused with electricity. It's a close battle for these awards!
Keep sending in nominations.

I thank Christopher Booker for pointing out these two "lunatic" articles. Booker coyly didn't name the two newspapers responsible for propagating the twaddle.
Posted by David MacKay FRS at 9:28 AM

a shame the rest of christopher booker's article is the usual UK moaning NIMBY 'we can never solve our problems' type monotony that I'm just sick of.

Agree about Telegraph getting Claverton comment wrong.
70 by 70 miles of wind supplies a lot of energy though (more than present UK electricity; latter >400TWh per year)
Total primary energy supply, all sources, for UK seems to be equivalent to >2740TWh, if somebody would check my calculation?
I find the different units confusing when comparing sources of primary energy.
Government statistics use "tonnes of oil equivalent" (236Mt/y o.e. is a recent figure). Conversion between units such as oil equivalent or "GW of production capacity" or TWh that I use, ignores very real differences in efficiency of conversion of actual physical primary supplies into useful work, and the losses along the chain. Electricity is inefficiently produced from fossil fuels but is in itself a high grade source that can convert more efficiently into 'useful' mechanical energy and heat, but does not store like oil or a tonne of coal.

I've been googling and stumble upon your useful info.. please keep us up to date in the future..
thank you..
Blood pressure watch
jelly roll pan